So, iTunes 10 looks like Apple’s college intern office bitch slapped the design together over the weekend while on a bender. What happened to those LEGIONS of UI designers they employ?

Let’s Talk About That Icon

It’s pretty damned terrible. It’s so bad that I don’t even care that the software runs faster than before (and it does). The improved respon­siveness has taken a backseat to shame. Ping? HOST UNREACHABLE. It’s an embar­rassment to use or to be seen using. Here are two pieces of shitty MS clipart that my wife found in Office 2007 in less than 45 seconds:

If these two crazy kids tried to get shitty on cheap wood­working glue and Mad Dog 20/20 one weekend and “made an oopsie”, you’d get some­thing that looks a lot like that icon.

Oh, and here’s a serious question: why are the window controls vertical? Chew­bacca lives on Endor! It does not make sense! Styl­is­ti­cally and concep­tually the whole thing feels clumsy and a bit like an attempt to get “in your face.”

Almost every damned widget is A) yet again custom to iTunes, not the OS; B) different than it was before. They’re almost all univer­sally ugly. Things that should be buttons are just sort of decal looking sections of the screen and a lot of stuff has tremen­dously crappy bezels for no real reason.

Is There Anything They Did Right?

The speaker management window is a tremendous improvement?

I think I like this hybrid cover art view they’re pushing for column based browsing. 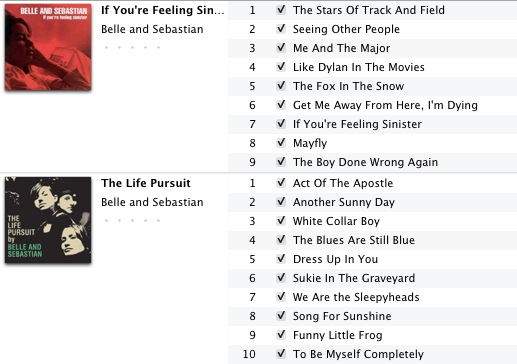 Too bad. iTunes 10 has munged with the DAAP protocol (which, admit­tedly, is Apple’s protocol, so it’s their right) and broken 3rd party DAAP servers. So, your Drobo, your Synology DiskStation, your Netgear ReadyNAS, and those Western Digital disks that support streaming music? They’re all basi­cally going to need firmware updates when the someone figures out what to patch or change in MT-DAAP (or Firefly, if you prefer) to make it work again; you can make a pretty safe bet that Apple won’t rev the protocol back to help fix this problem.

I have to believe that someone, some­where is laboring away on music library management software that isn’t encum­bered by goofy widgets and ridiculous business deci­sions. It’s probably not coming from the Linux camp (see: Rhythmbox, Banshee, Amarok, Clementine, & Guayadeque for an idea of where they’re rein­venting the wheel). Songbird is wrapped in XUL interface hell (never mind tech­nical backend “iffiness”). I think iTunes has been the dominant player in this space (at least in OS X) for so long that no one even bothers trying anymore.