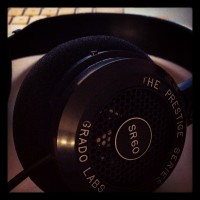 The creepy mustache that is Jesse Thorn, of Put This On (the thinking man’s style blog) published a bit about good head­phones back on February 16th. When you think style blogging, you probably don’t think about head­phones (unless you buy gimmicky equipment like Beats Audio…) but he recom­mended the same head­phones that my musician friends AND my audio­phile friends had both previ­ously recom­mended. After a week of hemming and hawing, I broke down and purchased an entry level pair of Grado SR60i headphones.

I had up until that point used an old pair of open-back Sennheiser HD570 cans for all of my “stuff I want to enjoy” listening; they’re nothing fancy but they sound clear and they’ve aged well over the last, I don’t know, 10 years or so that I’ve owned them. I don’t know if that’s before or after Sennheiser supposedly over-extended their brand in order to get shelf-space in big-box retailers, but I really wanted to know how these would compare. Peter, at Natural Sound of Fram­ingham (the gentleman who sold me the Grado cans) said quite matter-of-factly, “I think you’ll like these more than your Sennheisers.”

After a month of near-daily usage, I will tell you flatly that Peter was right. Jesse was right. My audio­phile & music nerd friends were right. They are the best head­phones I’ve ever owned, and it was $80.00 USD well spent.

Sure, on first glance, they kind of look like the sort of knock-off junk you’d find in a swap meet in the parking lot of an Arizona hardware store. The plastic is flat and black, there’s no gloss or glitz, they’re sort of just hanging off these steel posts topped with a simple plastic cap, and they have a cable coming off each cup instead of routing it across the headband like everyone else does these days.

You know why they look like that? Because every­thing that isn’t essential to making them sound good is effec­tively ignored: they’re built for listening to, and they are wonderful. I had initially toyed with picking up the SR80i’s instead, as a friend reminded me that they are supposed to be “measurably better” but I’m not really an audio nerd – I figured, “I’ve got tinnitus and I can’t really hear anything higher pitched than a child’s voice”. A month later and now I’m consid­ering getting a second pair (maybe the SR80i’s?) so I don’t have to bring a pair back and forth to and from work every day.

TL;DR Anyone want a used but serviceable pair of Sennheiser HD570 cans?

I also picked up an Audio­engine D1 USB/Optical DAC to use in lieu of the rela­tively noisy head­phone out on my laptop1. Not worth getting into since most of the tech­nical minutia is either over my head or beneath my concern but it was a solid, if unnec­essary purchase.