Anyone who has ever inter­viewed anyone for an open req. has expe­ri­enced a Candidate bombing the interview for one reason or another1, and we’ve certainly all bombed an interview. Now, I don’t know shit about hiring outside of tech­nical fields, specif­i­cally for web admin­is­trators and UNIX admins. But in that realm, I’ve been on both sides of the process for a little while, and these are the things that I think tend to be the most common reasons for Candi­dates to do anything less than shine (… or at least these are the things I’m most guilty of).

Fixating on the negative aspects of past expe­ri­ences:

Where I am now? We have this fucking guy, you know? He eats rice from a plate with a spoon, and it’s disgusting, he’s disgusting, and I can’t stand things that are disgusting!

Fixating on the positive aspects of where you’re currently working

Put another way, apol­o­gizing for having the gall to consider leaving where you are now:

No, no, it’s really great at ConGloMo! The air rifles only sting a little! I’m really very lucky to have a job at all! The dogs aren’t usually hungry so they don’t maul us when they chase us or anything!

It’s also come to my attention that some­times this mani­fests in the form of : 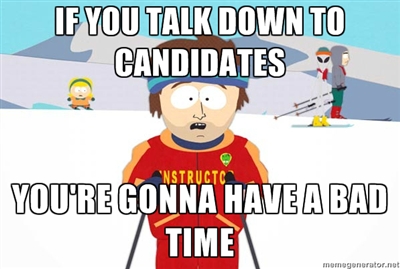 But I also think that these are often a side-effect of a small handful of condi­tions: being overly familiar or comfortable with the Inter­viewer (that’s not a bad thing), outright desper­ation (yellow flag) or excitement (which you should be selecting for), or just plain being damaged (dare I say shell shocked?) by whatever circum­stances caused a Candidate to start working the market (and that can be bad, right now, for you; they might get better if the pressure is eased off them). Or if they’re a non-local Candidate, maybe the travel took more out of them then expected and they are still adjusting to being anywhere except home. I am guilty of every single one of those myself, and that’s led me to think that any one of those missteps could have probably been turned into a positive pivot if Inter­viewers just tried talking to Candi­dates as if they already had the job.

Hey, here’s a novel idea: let’s try treating our Candi­dates like we already work with them

Inter­viewing is a stressful, bullshit-laden quagmire for Candi­dates for any number of reasons, but for the Inter­viewer any time spent inter­viewing Candi­dates is func­tionally time they’re diverting away from tangible actions that they could be working on right now. The hope is that this time is an investment, and not an expen­diture – bringing new talent on-board should help you maximize your teams produc­tivity long term. At least, that’s the goal.

But too often when inter­viewing, we’re content to let the Candidate dig their own hole. We stare Candi­dates down like police officers grilling suspects. Or we drill Candi­dates on insane micro/nano-scale ques­tions about tech­nical minutia. We quiz them on ridiculous topics like obfus­cated regular expression imple­men­ta­tions or obscure programming language and framework variants that they won’t actually be using. We wind them up, then we let them rant, stammer, and stutter into tail­spins and death spirals, before we press our advantage and quiz them on these things they’ve just said… and we pride ourselves on this behavior when they collapse! We tell stories about how bad our Candi­dates do, and how utterly awful this short window of time we had to form an opinion about them was.

BUT! What if instead of looking for reasons to disqualify Candi­dates and send them home crying on the next flight, we instead engaged them in the conver­sation? What if instead of letting a Candidate rant and rave into unpro­ductive negative space, we instead simply pointed out that the Candidate was getting out into that negative space and steered the conver­sation back towards produc­tivity with some­thing a little more mean­ingful than open ended, squishy ques­tions? Or what if we talked to them about why they’re so bitter? Why don’t we try listening to what they’ve got to say, because they obvi­ously feel like they need to say it. That’s what we’d do if this was someone we already worked with, isn’t it? I think that there is real benefit to using this time with our Candi­dates to talk to them like the people who are already here.

Don’t be scared to talk to, not at, your Candidate

We don’t have a lot of time together with Candi­dates, and we get only fleeting impres­sions of who they are. We throw around words like “behavior-based interview” like it’s some sort of magic talisman to protect us from making hiring mistakes, but that’s all just juju2. When this sort of thing is taken to the logical conclusion then you wind up with cargo cult version of the Voight-Kampff test, as seen during the beginning of Blade Runner… and how did that work out for Holden?

To use a photog­raphy analogy, the lens we usually have on Candi­dates (and that they have on us) during an interview is stopped up pretty narrow, which is to say that it’s highly selective – we only see what they (hope­fully) want us to see, and we (hope­fully) only present what we want them to know. But maybe it’s time to reex­amine that rela­tionship and see if we don’t get more mean­ingful insight by opening it up and widening that aperture a little.

As long as you’re not leaking confi­dential infor­mation, why don’t you talk through one of your current problems or projects with the Candidate? Ask them for insight. Isn’t that what you do with your peers? Talk to them about your design constraints, and see what they think about the problem. Better still, why don’t you ask them what sort of problems they’re working on right now? Engage them in their wheel­house, and will­ingly shift the advantage to them. Don’t be scared to let the Candidate take the lead, and see where your conver­sation with them goes. Go ahead and get real weird with it, and see how the candidate handles not being quizzed on nonsense. This seem like a no-brainer when someone actually says it aloud but seri­ously, give this a try: let your Candidate do what you want to hire them to do, and let them impress you.

But, but, but… what about the bozos?

Yeah, I’ve read Guy Kawasaki’s writings about “bozo explo­sions” too and you’re not clever. It dimin­ishes us all when we reduce and polarize into camps of bozos and rock­stars (or losers and winners, or users and admins, or Star-bellied Sneetches and Plain-bellied Sneetches). Candi­dates have it rough in the market. They don’t need you piling on them too.

Look, the plain truth is that the world is full of bozos; you’re a bozo in the wrong crowd, so stop sweating keeping them out. Your company has probably developed a culture that you/it/they pride yourself/itself/themselves on, and that culture should be strong enough to select against the traits that you’d use to describe the so-called clowns at the door. If they’ve made it through to the interview phase, then you’re not screening for the right traits. If that’s the case, of course you’re going to get subop­timal results. Fix your filter, and repeat the process.

It’s always OK to say that someone isn’t a fit for the culture or the work; that’s the nature of the beast. But you don’t need to reduce your Candi­dates to one-dimensional jokers when you do it and you certainly don’t need to try to break the cutie. If your Candi­dates really fare so poorly during their time with you, then I cannot stress enough that you really, really need to consider reviewing how you screen your Candi­dates before you ever bring them on-site for a sit-down. That will probably produce more results in the long and short term than wondering why these people are just so bad. Hell, you should probably be doing that anyway after every few Candi­dates, if just to figure out why your process isn’t bearing really great fruit more often. I mean, if your devel­opment process is already data driven, why shouldn’t your interview process be too? But I digress… that’s another post entirely.